Happy Fat Tuesday everyone.  Fat Tuesday celebrates the last day of Carnival, which begins on January 6th.  In celebration of Mardi Gras or Fat Tuesday many people serve Kings cakes which originally were made to celebrate the Epiphany, or the day the three wise men visited the baby Jesus.  A plastic baby Jesus or a bean to represent the baby is placed inside the cake and the tradition is that who ever gets the baby will have wealth and luck through out the rest of the year and they in turn must make the next King Cake or host the next Mardi Gras party. Traditional cakes are filled with cinnamon, round to represent the shape of a kings crown and covered in gold, purple and green sugar or frosting, the gold represents power, green faith and purple justice.  In honor of the day the following is a traditional King Cake recipe for your Fat Tuesday celebration. If you make the following recipe and want to add the toy Baby Jesus to the cake remember to add it after the cake has baked or the plastic will melt during cooking.

Cook first 4 ingredients in a medium saucepan over low heat, stirring often, until butter melts. Set aside, and cool mixture to 100° to 110°.

Turn dough out onto a lightly floured surface; knead until smooth and elastic (about 10 minutes). Place in a well-greased bowl, turning to grease top.

Cover and let rise in a warm place (85°), free from drafts, 1 hour or until dough is doubled in bulk.

Punch down dough, and divide in half. Roll each portion into a 22- x 12-inch rectangle. Spread 1/3 cup softened butter evenly on each rectangle, leaving a 1-inch border. Stir together 1/2 cup sugar and cinnamon, and sprinkle evenly over butter on each rectangle.

Roll up each dough rectangle, jelly-roll fashion, starting at 1 long side. Place one dough roll, seam side down, on a lightly greased baking sheet. Bring ends of roll together to form an oval ring, moistening and pinching edges together to seal. Repeat with second dough roll.

Don't feel like cooking but want to celebrate?  Red Lobster has their Lobster Fest going on right now, you can get Main and Rock Lobster, Parmesan lobster and shrimp bake, shrimp, lobster and langostino linguini Alfredo or the more traditional Surf and Turf meal with Lobster and a peppercorn-rubbed center-cut sirloin.  Here are two great coupons to help you out, $3.00 off of any two lunch entrees and/or $4.00 off any two dinner entrees, both good until March 18th, 2011.


Happy Fat Tuesday everyone and remember to enter my $10 Amazon give away! 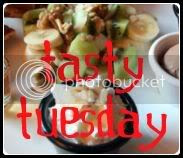