Jalapenos Are Not a Secret Ingredient 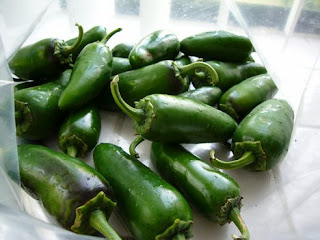 For example on Thanksgiving he made homemade cranberry relish with jalapenos. I know that when you think cranberry, you think jalapenos. He likes to put jalapenos in anything he can. I think he thinks of that little bundle of hot as his "secret" ingredient. He always claims its just "a touch", but its more of a punch.

On Christmas Eve we usually just have appetizers and a soup for dinner. A couple days before the big day, he stopped by to talk about the dinner with me. I explained that I was going to be making a wild rice soup for Christmas Eve. He then proceeded to tell me that he was going to go home and make 15 bean soup. My first thought was, Who even knew that there were 15 different types of beans? Then my panic set in and I asked him what he planned on doing with a big pot of bean soup. His reply set fear in my heart, "I'm going to bring it to your house for Christmas Eve. That way you guys won't have to cook so much." I tried to explain to him that I wanted to make wild rice soup, I didn't mind. I really wanted that. He chose to ignore my plea and proceeded to tell Mr. Bernie about his plan for the soup. Mr. Bernie reminded the brother, "Bernadette doesn't like beans." The brother in law had an answer for that. "Oh, it has lentils in it. She won't notice the beans. They shouldn't bother her." What??!! I hate beans. Its only in my 30's that I will eat green beans. A huge pot of beans doesn't rock my world. He brought the soup over on Christmas Eve. I avoided it like the plague. He was able to add his jalapenos to the soup.

For Christmas, Santa brought the brother in law a Taste of Home Cookbook. Those are normal recipes. Nary a jalapeno in the book. As brother in law was reading the cookbook, he would read some recipes out loud. He was really excited about one recipe in particular and told us what he would add to make it even better. "That recipe sounds good. All it needs is a bit of jalapeno to kick it up a notch!"