I sure hope you all had a beautiful Easter!! We were blessed with news that we have a showing request for our house today so we have spent the weekend cleaning to perfection anything and everything. Because there is no Meet Me On Monday hop this week and I have been overly stressed I haven't had a chance to prepare something for today's post......Enter one of the best friends a gal could have and you get a great story from Bernie over at One Mixed Bag. I made a special request for the Thrift Store Story, a tale of madness and mayhem....I hope you all enjoy it, please check out her blog if you haven't already, she is sooooo much fun to read!

I Live With A Super Hero 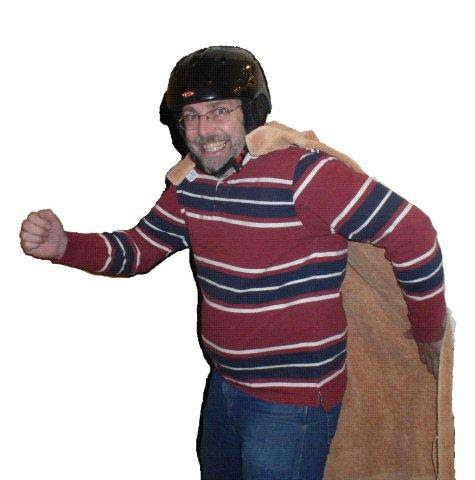 After unpacking our few boxes of Christmas, we decided to head to the thrift store to beef up our lack of Christmas decorations. I had a few ideas in mind and you never know what you can find. Who knows what treasures were awaiting for us to snatch up.

While I was looking for Christmas stuff, Mr. Bernie was looking at tools and other assorted items that I could care less about. I lost track of him for a bit. I struck up a conversation with a couple who were just poking around as well. We were having a nice chat when all of a sudden Mr. B found me. It was not a little, "Oh, there you are." No, he came running up and hopped in front of me and said, "Look what I found!!" I about died, he was wearing a black helmet and bouncing around like a little kid! The gal I was talking to stared at him like a deer in the headlights and quickly scampered away. I took it all in, Mr. B. standing in front of me wearing a black helmet and grinning. He asked if he could have the helmet for when he rides his bike. Its one thing to carry the helmet, but another to actually wear the darn thing in the store and bounce around.

I had a couple other things I wanted to look at and suggested that he might want to take off the helmet. He explained that he wanted to wear it around and followed me around like a puppy. He kept saying, "Do you like my helmet? Does it make me look sexy?" Finally, it was time to go check out. I suggested that he take off his nice helmet so the cashier could ring us up. He pouted and whined but did take it off. As soon as the lady had rung it up, he snatched it back and promptly put it back on his head, grinning. I reminded him that I only had him signed out of the home for a few hours. I had to say something as I think the cashier thought he had lost his mind. I hissed under my breath to take it off. But he had selective hearing and chose to ignore me.

He walked out of the store with the helmet on. I walked a few steps back. We get into the car, with him still wearing the helmet. I told him that, "Nobody wears a helmet to drive, now take it off!' He looked at me as if I was the one who had lost their mind and said, "Race car drivers wear helmets, Vrrrooom, Vrrrrrroooommm!" I'll be dipped if he didn't wear that helmet all the way home. He got quite a few odd looks. Shocking, I know. Everyday you see someone wearing a helmet during a commute home. *eye roll*

We have a running joke about him wearing a helmet and cape. He always wanted to be a superhero. Now he has a helmet and so I wanted to get a picture of him looking all Super Heroish. I asked him if he wanted a green cape, (one of my green towels) He explained that he wanted to wear his special ORANGE cape to have his picture taken. When one is going to ask so weird, does the "cape" color really matter? I found out that Yes, yes it does.