How To Kill an Afternoon With Cats

Last year we decided to enter our fur kids in a contest on a local website. Mr. Bernie thought I had been drinking or something when I suggested it. He reminded me that they are three very different cats. He also reminded me that they wouldn't be very excited about all being together in one spot. I told him that it was not like I wanted to dress them in doll clothes and take their pictures. I was not a crazy cat lady! I promised him that it would be fun. It wasn't. This is my little warning to you, if you ever think taking a group picture of cats is fun. Its not. Go hit yourself over the head with a hammer until the feeling passes. Trust me on this.

The cast of cats from left to right:
Gwynnie, 12 year old, British Short Hair. She is old and doesn't like to move much. - Grey/White
Abby, 4 year old, Maine Coon. She loves to hide in places she shouldn't. - Black
Captain Luke Fuzzy Nutz the 1st. is a Turkish Angora. Our only boy and 2 years old. 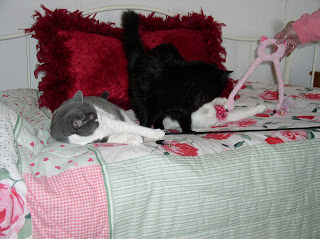 This is how it started. I was off to the side waving a cat toy like my hair was on fire. 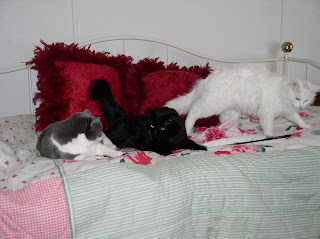 Luke had better things to do. 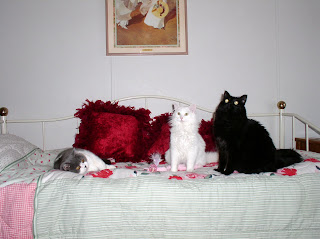 So close! They look as if they are waiting for the Mother Ship to suck them up into a space ship. 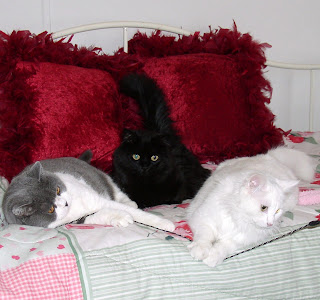 Finally, a picture we could submit. Notice how Gwynnie did not move the entire time. She is not dead. She is not built for speed. If the youngersters had Gwynnies "speed" it would been easy.

They are having the same contest this year. I mentioned that to Mr. Bernie and he just groaned and rolled his eyes. He suggested we would have an eaiser time getting the dog in a dress and posting that. I was tempted, for about a minute. Then I realized I didn't know her dress size.