Living With a Writer Must Be Hard 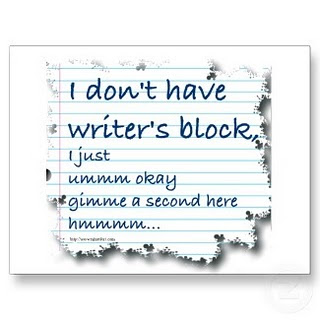 I feel bad for poor Mr. Bernie. He is just sitting around absorbed in Mafia Wars and suddenly hears a whine from across the room. "I don't know what to write about." Keep in mind that it takes Mr. Bernie a minute to figure out what day it is to realize which writing thing I'm whining about. It could be for my own blog One Mixed Bag. It could be for the local Duluth Minnesota paper I write for. It could be for Living on Less. It could be the grocery list. It could be a birthday card. He never knows which. Some days I have a hard time keeping it straight too.

The Mr. will sigh and look up at me with a deer in the headlights look. Then he will carefully weigh the question posed to him and finally speak. "Bernadette, what day is it? Which one are you writing for?" I might say, "I don't know what to write about for my blog today. Help!" Bless his heart, he will actually pretend to look like he is thinking. He will say something like, "Hum, that is a good question. What should you write about." Then go on to play Mafia Wars. In his head he has done his husband duty. Acknowledge that I spoke to him and pretend to actually be thinking.

I will leave him alone for about 10.3 minutes and whine again. "Mr. Bernie......*whine, whine*...I'm stuck. Help me. You haven't done anything amusing this week." This is usually met with a mumbled, "Gee, I'm sorry. How thoughtless of me." I will figure something to write about and forget his lack of help until bedtime. He thinks that bedtime is a good time to say things that he feels will be helpful for me to be funny.

The other night is a good example of his being helpful. Mr. Bernie was all snuggled into bed and warm. I crawled into bed and had him roll over to snuggle with me. I was freezing! I asked him if my cold bottom felt like a frozen turkey. His reply was, "No, its too squishy." What?!! I flipped over and asked him to repeat what he said. Which he did. Then he said to me, "There I gave you something to write about tomorrow. No need to thank me. That was a freebie. Good Night." He rolled over and went to sleep.

He's such a help bee.

Image from http://homebasedentrepreneurism.blogspot.com
Posted by Bernie at 6:00 AM