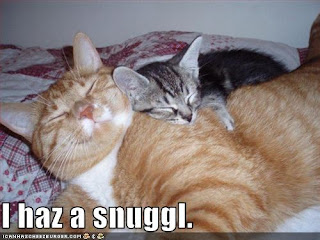 Mr. Bernie and I have been known to have odd conversations. Things that really don't mean much of anything. Last night was no exception. I thought I would share the start of The Great Snuggle War of 2011.

When Mr. Bernie and I first started to share a bed it was weird. He had been a bachelor for quite some time. As we got ready to go to sleep the first time, he informed me that he didn't like to snuggle. He wanted to sleep and not be "bothered." I was so paranoid about this that I didn't sleep for the first week. I was afraid that I might accidentally brush against him. I laid on my side of the bed, practically falling off the edge so as not to bother him. That was so relaxing. Not!

Fast forward several years. Now the Mr. will snuggle in his sleep and not even realize it. Which is not a bad thing at all. Yesterday, I made a comment about his good snuggle habits. Pointing out that he is such a good snuggler, that he snuggles without even realizing it. He denied it of course.

All this snuggle talk lead to a great debate last night. Mr. Bernie told me that he doesn't need to snuggle. He doesn't need to snuggle, but he knows that I need to snuggle. Therefore, its just something he does for me. A sacrifice of sorts. He could live without it. I countered that by reminding him that he snuggles in his sleep. "Do you wake yourself up thinking, that Bernie needs to snuggle?" He agreed that was what it was. Smirking and chuckling the entire time.

When we got into bed last night, I suggested a bet. I bet him a nickle that he can't go all night without snuggling with me. He bet me a nickle that I would "foot snuggle" with him Foot snuggle? Is that even a real term? I asked him what foot snuggling was. He put his feet against my feet and told me that was what I did to him at night. I assured him that there would be no foot snuggling on my part.

The lights were shut off and I was on the very edge of my bed. I almost had my feet hanging over the edge. I didn't want to loose the nickle and be a foot snuggler. No Siree, I was going to win this Snuggle War. Mr. Bernie was on the edge of his side of the bed. You could have parked a truck in the space between us. After a few more taunts by the Mr. I finally feel asleep.

I woke up this morning at the edge of my bed. I don't think I was a foot snuggler, but its hard to tell when one is sleeping. I guess I will find out this morning if I owe him a nickle. I sure hope not. As far as I know, he doesn't owe me a nickle. Yet, it could be a wash.

Yes, we do have too much time on our hands. Thank you for noticing.
Posted by Bernie at 7:08 AM